Published by We Love Koh Chang On 21st February 2015 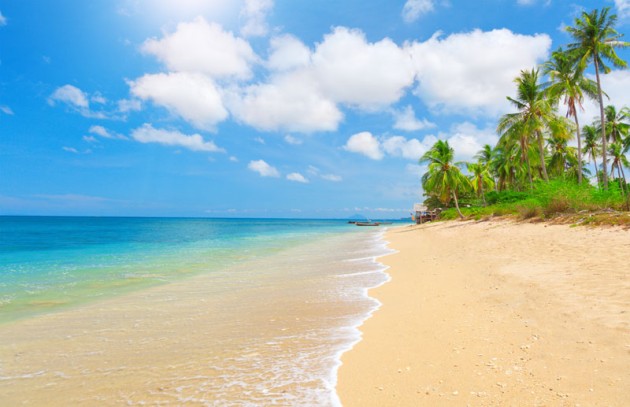 With it’s western coast line smothered in a richness of unspoiled whites sand and a profusion of coral and marine life it’s no wonder Koh Lanta is becoming one of Thailand’s sought after destinations. Koh Lanta is actually Two islands Koh Lanta Noi (Small Lanta Island) and Koh Lanta Yai (Big Lanta Island). All the tourism and beaches being found on Koh Lanta Yai.

Situated in the South of Thailand in The Andaman Sea about a Two hour ferry journey from Krabi You will find the island of Koh Lanta. The island is very accessible from a number of favoured tourist destinations in the south of Thailand and Ferries to Koh Lanta during high seasons run from Trang, Krabi, Phi Phi Island and Phuket. Those travelling here from Bangkok have the added luxury of 3 nearby airports in Trang, Phuket and Krabi to relieve a lengthy trip by road.

The weather in Koh Lanta is at it’s best during it’s high season Months of October to June. Between November and April the island is at it’s busiest and temperatures get as high as the mid 30’s. During the rainy season of June through til October the island slows down a little due to the weather. Whilst the island is still very much visitable during this period some resorts do close and the sea can get a little bit rough.

For many years Koh Lanta was very much a place where only backpackers visited and the hotels in Koh Lanta certainly reflected this. Guesthouses, beach huts and Bungalows still remain in full force on the island but a steady development of resorts and higher class hotels has altered the trend slightly. Most accommodation on the island is found in the north west of the island.

Whilst the popularity of Koh Lanta has grown significantly over recent years, beaches in Koh Lanta are still far from being overcrowded. With 9 beaches lining the west coast of the island all with a richness of magnificent beauty you are spoilt for choice in the pursuit of paradise.

The Andaman Sea is regarded by some as a mecca for Scuba Divers. Scuba diving in Koh Lanta being it’s sacred best. Whilst the island attracts a large number of visitors through it’s beaches and laid back atmosphere the surrounding coral reefs of the area are becoming internationally recognised as some of the finest.

Nightlife in Koh Lanta is far from extravagant and those in search of wild parties are better served on Phi Phi island or Phuket. The beaches are lined with some great restaurants in Koh Lanta where an evening watching the sunset or admiring the spectacular scenery of the island can be spent. The Long beach area does have some busy bars that will see buckets and cocktails flowing through the night but only on a small scale.

Koh Lanta comes with very an extremely laid back ambience that can be enjoyed by families, couples and backpackers a like. Its world class Scuba Diving and beaches make for a great experience for all.